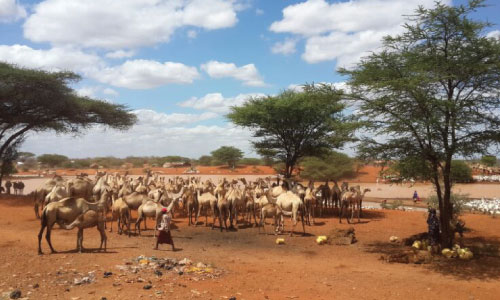 Northern Kenya is a region with immense potential in terms of its livestock production system, chiefly pastoralism. This region forms 90% of the Arid and Semi-arid area coverage of Kenya. ASALs are home to 20% of the Kenyan population and 80% of the livestock. Livestock production is the main source of livelihood for over 80% of the population in this region including Marsabit County. Over the last ten years, the region has suffered recurrent drought and extreme climatic conditions with devastating effects on the environment and livelihoods of communities. Pastoral communities have observed the increased frequency of drought with consecutive seasons of failed rains over the past five years. This has put them in a very precarious situation with their livelihoods and way of life threatened. This is exacerbated further by the low capacity of communities and government departments in the region for disaster preparedness, response and reduced coping mechanisms for such eventualities as drought and livestock diseases. While government and donor led initiatives for drought management have improved early warning at the county level, community-based early warning and response systems need to be strengthened and widened. Malnutrition and more specifically undernutrition is a key indicator monitored in humanitarian contexts. It is directly related to the health and productivity of a population and is an indication of mortality risk. The causes of undernutrition are multifactorial. In pastoralist or semi-pastoralist communities, undernutrition has been shown to be strongly related to deteriorating milk availability, access or utilization (Milk matters, 2009) and therefore it is important to develop measures that protect those parts of the household livelihoods which contribute directly to the food security and nutrition security of the family. In the ASALs, this means protecting livestock, milk production and milk availability in the markets. A surge approach is one that allows systems services to scale up and scale down in response to shocks on the system to protect the system from becoming overloaded and allowing it to continue providing quality and efficient services in times of stress. The original concept for the livestock surge model was that it could be based on the Community-based Management of Acute Malnutrition (CMAM) surge model which was piloted by Concern Worldwide in Marsabit, targeting 14 health facilities for a period of 29 months. Between 2014- 2015 Concern piloted data collection for key livestock indicators to see if the information was easily collectible and to identify if those indicators had a direct or discernible link to milk availability. This would form the basis of the development of a livestock surge approach. However, this process proved challenging and the approach was reviewed by outside consultants in 2016. The review found that:

1. Despite the Marsabit programmes being led by dedicated Concern staff with a good understanding of the context as well as the opportunities and challenges, there was confusion in the team on how the surge approach should fit into the rest of the activities supporting the capacity of the County Department of Livestock, Agriculture, and Fisheries (MoLAF)

2. The agreed-upon indicators for the pilot surge approach were based on the monthly reporting by sub-county Veterinary Officers (VOs) and Livestock Production Officers (LPOs). There was no specific data collection or monitoring of trends of these indicators in line with the surge approach. A simpler set of indicators is required and the capacity needs to be built at household and ward level on how to collect and analyze the indicators and decide if a threshold has been reached

3. There was a misconception that the surge model was a package of external support for response activities to be conducted during different phases of drought. It would be useful to reorientate the main stakeholders to the concept of a more internal, system based surge model, focused on women at the household level.

5. There are no separate water supplies for livestock and domestic water use so the bulk of the demand for water services is for livestock – the implication is that an effective livestock surge model will also have to include water surge activities.

6. The pilot surge model was not well linked to the county-wide Drought Monitoring System. Collaboration with NDMA